Vegan and vegetarian, what’s the difference? A vegetarian lifestyle is to avoid eating any foods that are made by an animal killed for the purpose of eating (fish, meat, poultry etc,). Any dairy product like milk and cheese are not included in this category because it does not lead to the killing of an animal.  On the other hand, veganism is the practice of not eating or using any products made from animals, even if the animal was not killed. Unacceptable products include eggs, milk made from animals (does not include almond, soy, or coconut milk), clothes or other products made from animal fur or flesh, and ofcourse eating animal products like meat and fish. The difference between veganism and vegetarianism is that in vegans´ eyes, all animal products are not to be used or ingested; whether the animal was killed or not. 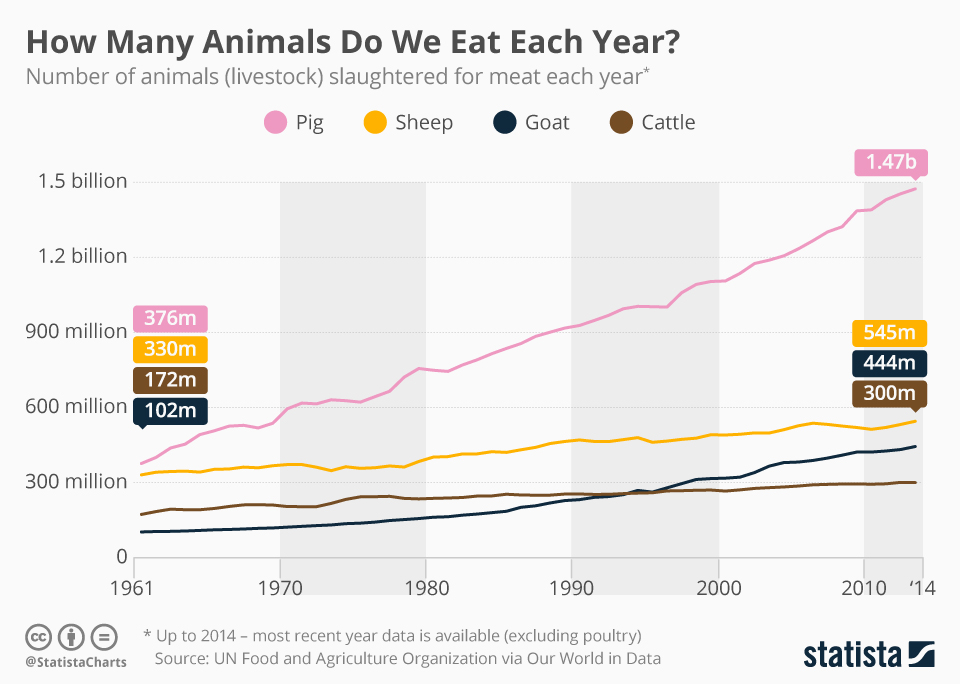 Veganuary is a UK based 31 day challenge in which people go vegan for a month and in some cases longer than a month. Fact, Veganuary is not a challenge to help you lose weight. However, experiencing weight loss could happen. The main purposes of the challenge is to help endangered animals and the health of those who participate, which is why more people should be participating.

Why should more people participate in Veganuary?

Veganuary helps raise awareness to animal suffering around the world. According to sentientmedia.com, an estimated three billion animals are killed everyday for food. Even more devastating information, 97 percent of 10 billion animals that are tortured and killed are farm animals. Animals ranging from chickens to cows (for meat and milk) to sea creatures. In participating in veganuary, countless lives of animals are saved from torture and death. There have been times in which those who participate in, or have participated in, Veganuary exceed the challenge and carry on a vegan lifestyle for more than the month of January.

Veganuary is not only beneficial to animals, but also to those who participate. It’s no secret there are many animals that are fed steroids, force fed, and, once dead, are injected with preservatives before being shipped to stores. These steroids and preservatives can be extremely harmful and long-term fatal to consumers. The consumption of preservatives can kill the bacteria in the human body, both good and bad bacteria. As well as the interference preservatives cause between the signals that are sent in between the gut and the brain. When someone is eating they become full the digestive system sends signals to the brain indicating to stop food consumption. When the signals get messed up due to preservatives, a person will continue eating which will lead to discomfort, weight gain, and possible health issues.

A major concern for those who choose to become vegan, even for a month, is the lack of necessary nutrients that the human body needs to function. Necessary vitamins and minerals that are usually found in meat, fish, and milk become inaccessible to vegans. Vitamin B12, for example, is an important vitamin commonly found in animal-based foods. Vitamin B12 deficiency can lead to a reduction of red blood cells with symptoms of fatigue, breathlessness, and poor balance.  Creatine is an easily accessible energy source for muscle cells, offering better strength and endurance. Docosahexaenoic acid (DHA) is another important nutrient that vegans can lack if not careful. Deficiency in DHA can prevent development of brain health and mental function, seriously damaging to children. However, there are supplements that can be taken to help provide sufficient nutrients while maintaining a vegan lifestyle like B12 pills.

In reality, the only suffering that participants would go through is fighting the cravings. Going vegan is about helping animals against killing and torture. A helpful reminder of how many animals go through torture and death, not to mention harmful preservatives, will help participants reject using animal based products. Millions of animals can be spared of suffering at the hands of humans if more people participated in Veganuary.

For more information about veganism and the 31 day challenge visit: Veganuary.com

A list of 40 five-star recipes to try at feastingathome.com and Tripadvisor or Yelp can help find vegan friendly restaurants.